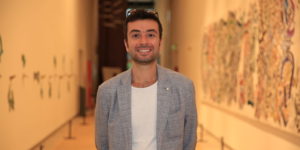 Rabih El-Khoury has been working with the Metropolis Association in Lebanon since its inception in 2006 as administrator and then as Managing Director. He has also worked for the cultural association Beirut DC for the promotion of Arab Cinema as general coordinator for its Arab film festival The Beirut Cinema Days since 2006. He has organized over 20 Arab film weeks in the Arab World and Europe. Since 2014, El-Khoury is the Programme Manager of Talents Beirut and is a member of the administrative board of the Metropolis Association. He is also curator of the Film Prize of the Robert Bosch Stiftung and works as a programmer for the Beirut Cinema Days and Alfilm, the Arab Film Festival of Berlin. He has recently joined the team of DFF – Deutsches Filmmuseum & Filminstitut in Frankfurt as Diversity Manager.

Any cookies that may not be particularly necessary for the website to function and is used specifically to collect user personal data via analytics, ads, other embedded contents are termed as non-necessary cookies. It is mandatory to procure user consent prior to running these cookies on your website.